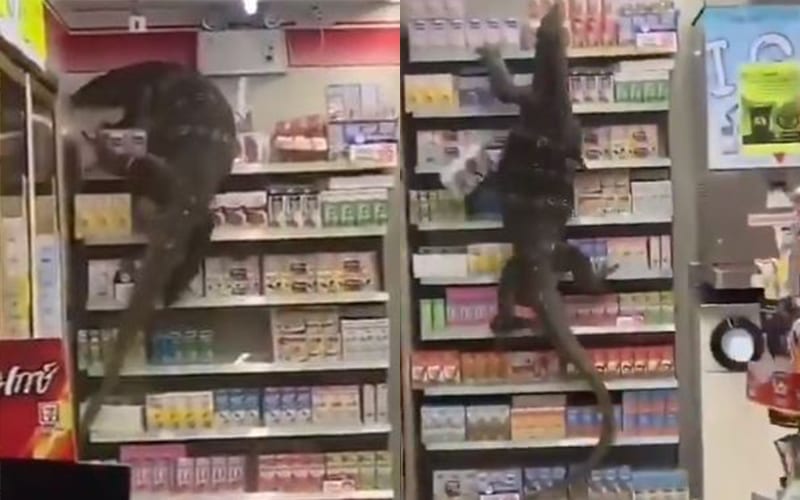 If you need your daily dose of “Why am I so mortified and yet still continue to watch this?” then you’re at the right place. Thailand is famous for a lot of weird things, but this one probably tops them all.

A video recently surfaced online, which shows a large lizard simply climbing onto a shelf with a lot of food items. However, the lizard simply ignores everything on the counter and aims for the top. Before you know it, he’s just sitting there, at the top of the shelf, merely looking at his new surroundings.

As per a report by Daily Mail, the customers & staff simply hid while the lizard scoured the place. According to their reactions, the lizard was simply looking for food. They called the police, who brought with them some reptile handers. Lucky, the lizard was out of the store before anyone had any crazy confrontations with it.

The woman who managed to capture this crazy incident revealed that her initial goal in the store was to buy a drink, but she couldn’t deal with the fact that the lizard was too close to the aisle with the drinks.

I only stopped at the shop to buy some food and then saw the huge monitor lizard inside. I wanted to buy a drink but the animal was too close to the drinks aisle. They’re dangerous animals, especially when they’re angry, so I stayed back and recorded it on my phone. I guess that shops have everything, even for lizards.

These lizards are called Monitor lizards, and they usually feast on insects, frogs and little food scraps from humans. Since it’s been dry in that particular area for a last few months, the lizards have been having it rough. The reptile controllers revealed that they left it in “nearby underground” so it might be that the people of the locale haven’t the last of the lizard just yet.