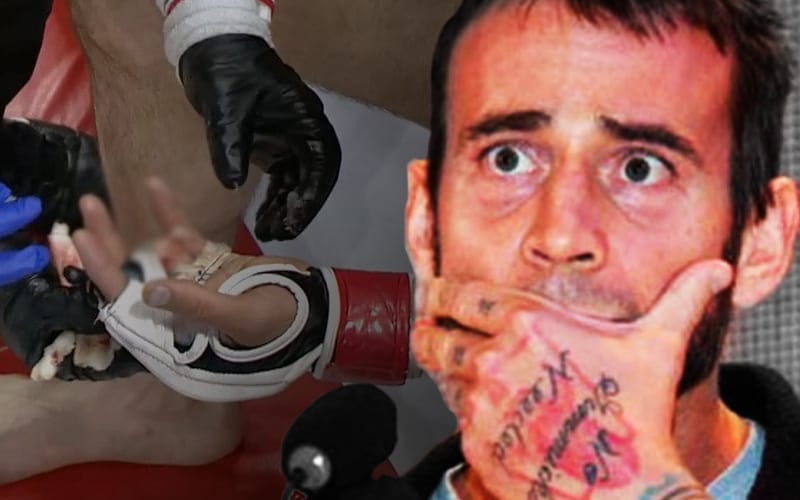 The world of MMA is certainly a dangerous one as injuries can happen at any time in a fight. Sometimes, the most shocking of injuries happen when fighters are punching and kicking with partially covered four-ounce gloves. It seems that is exactly what happened recently at CFFC 94.

Khetag Pilev faced Devin Goodale in a one on one fight in the co-main event of the night. Somewhere between the second and third rounds, Pilev and his corner seemed to notice something was wrong. It was discovered that Pilev lost one of his fingers.

Commentators Joe Morgan and former WWE Superstar CM Punk were utterly speechless at what transpired. After some speculation, it was concluded that Pliev’s ring finger had somehow become detached from his hand.

Goodale was declared the winner by TKO after this shocking incident. Here is what CM Punk had to say:

“I don’t understand exactly what happened. We’re not gonna replay it for you, ladies and gentlemen, but it wasn’t a compound fracture. It wasn’t a dislocation, a break, a laceration. His finger was just gone. It’s gone. It fell off, ripped off.”

Thankfully, Pilev was sent to a hospital and had his finger reattached, as reported by Marc Raimondi.

Good news. I just spoke briefly to CFFC fighter Khetag Pliev. He’s in the ER now and his finger has been re-attached. More coming soon to @espnmma.

This was certainly a horrific injury and we are glad that Pilev didn’t lose his finger forever, as that would have meant the end of his MMA career.

Thanks to CBS Sports for the quotes.