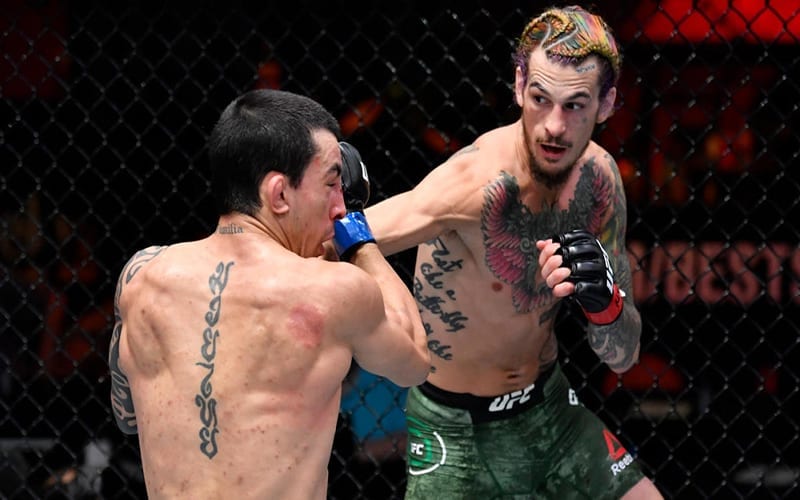 Sean O’Malley is one of the hardest hitters in the UFC Bantamweight class. After winning against the Brazilian fighter Thomas Almeida, O’Malley said that before he had even landed the final hit on Thomas, his eyes had already left the light of consciousness.

O’Malley & Almeida faced each other at the pay-per-view main card of UFC 260. With the record of 13-1 MMA & 5-1 UFC, O’Malley has some of the most lethal hits in all of Bantamweight class. While Almeida has a compelling record of 22-5 MMA & 5-5 UFC, he went down against O’Malley in the third round.

After O’Malley connected a concussive short left hit to Almeida, and he landed on the canvas. To finish it off, O’Malley landed another hit on him to claim his victory, though he noted that he probably didn’t need to do that at all. In the Post-Fight Conference, he revealed that:

It was still potential viral. I think it was a good knockout, (but) that shot was unnecessary. I looked into his eyes – he wasn’t there. But in the first round, after (the referee) said, ‘Hey, if I don’t stop it, you have to keep fighting,’ I had to give him my little ‘2,’ a juicer to the lips.

O’Malley had an opportunity to win in Round 1 after he made Almeida wobble off, but the referee did not call it. O’Malley felt like it should have been called, but ultimately he was happy that he got more time in the cage to savor the fight.

I’d have to see it, but I’m glad he didn’t. I got to go a whole other round. The amount of times I watch my fights is ridiculous. I’m my No. 1 fan. I think that’s why I improve so much. I record every single sparring round and I watch it. I watch it in slow motion and I’ll send sweet clips to my coaches. So the fact that I got to go a whole other round or round and a half, I’m OK with that because I’m going to watch it 100 times.

Sean O’Malley is only 26 years old, so it’s clear that he has a long and prosperous career ahead of him. As he rushes ahead in the race for securing the Bantamweight title, let’s see how does the competition fairs well in front of the champion.