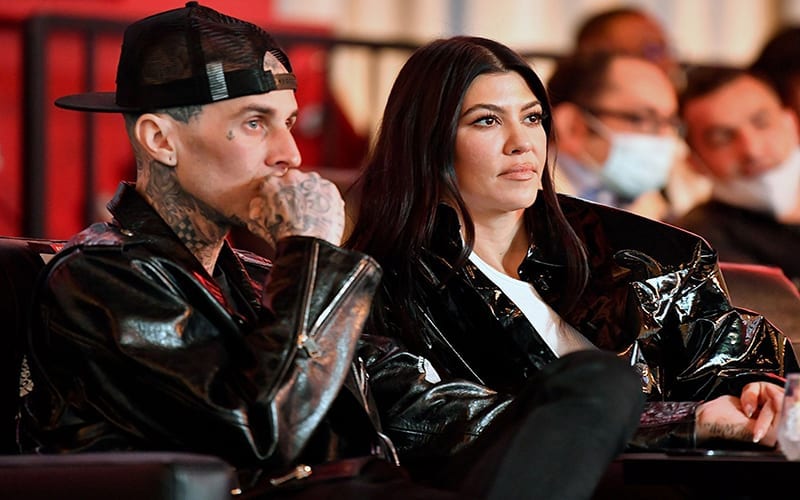 Kourtney Kardashian & Travis Barker, one of the hottest power-couples in Hollywood right now have given their official first public appearance. They chose the venue of UFC 260 to do so, and it just so happened that they did it alongside another celebrated Hollywood power-couple.

The couple’s table was right next to Megan Fox & Machine Gun Kelly, another celebrity couple that has been making headlines regarding how well MGK is inculcating into Megan’s life.

While the highly anticipated UFC match up between Francis Ngannou & Stipe Miocic took place, the couples enjoyed themselves and treated themselves with a nice evening at the venue.

Both couples were dress up in cool attires. While Travis wore a black baseball cap alongside a black top, Kourtney had a white crop top on along with vinyl black pants along with a black jacket, both of which shown brightly with the light. The couple were enjoying their lollipops when they greeted the camera, and they did it by holding up the rock sign to it.

MGK & Megan Fox were sipping to their drinks while they greeted the camera. Megan was rocking a black top underneath a black sweater while MGK rocked a grey V-necked long-sleeved top, along with his infamous big necklaces.

Despite Stipe Miocic picking out his competition for the next fights before he had even faced off again Francis, he ended up losing and now the game is all Francis’. Let’s see what other celebrity couples we end up seeing in the upcoming UFC events.