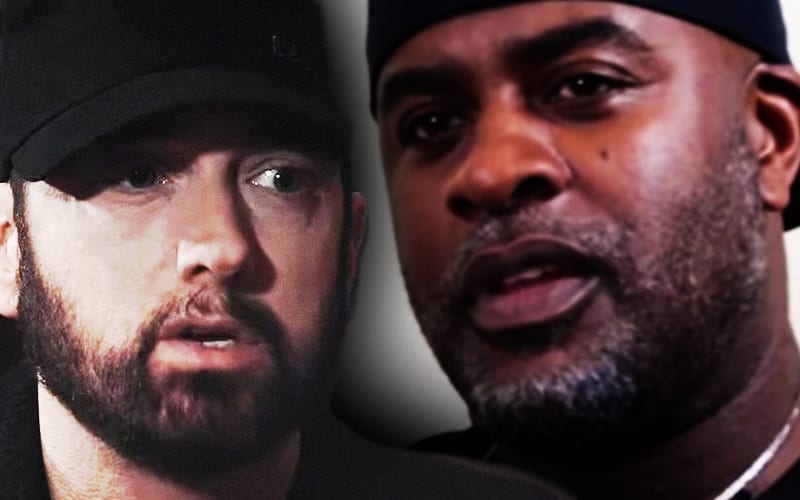 Eminem had his share of chaotic moments and he’s been unpredictable at times. Shady’s former bodyguard Big Naz knows all about that.

Big Naz recently sat down with Cam Capone News and told all about how Eminem owed him money and his attempts to get paid. Back in the day, Eminem was strapped and he had no issue letting people know about it either. This ended in a standoff in Eminem’s driveway where both men came prepared for war.

“Once Eminem and his team canceled checks for me cause I was going to quit if they would not pay me properly. I had to pay $6000 to the bank. I went apeshit. I went all the way Detroit. You don’t play with my money. You don’t play with my family. I called Eminem and he was explaining something. I said ‘don’t talk to me like that cause you are talking to somebody who knows everything about you. I know where you at all times a day, what you do, who you thinking about, who you going to see. I know everything that you do, so please don’t do that man.’”

“We had a big fallen out. Then I called Paul and I left a message to Paul and this is where I messed up. I said ‘if I don’t get my money back on my account we have a problem. You all got my wife fired [she was working at the bank at that time], you all pull the money that I already earned and now you all put me in a tight! I need that f*ckin’ money or some sh*t gon’ down.’ Paul takes the voicemail and sends it to to his attorney and attorney sends it to state police. The state police file a PPO. By this time, I’m driving to the Em’s house. I get there. There are Em and Kim. I knock on the door. Em was not there. Kim answered the door and whole house was in panic. ‘Oh my god, Naz is here to kill us all.’ I did go there with bulletproof vest on, heavy artillery. I was hoping to talk but I was prepared for war.”

“So Kim opened the door with holding Hailie. I said I don’t wanna problem. I’m here to see Em. I just want my money. She said Em’s not here and ask me to leave. As I turned to walk away Em’s is pulling up the street in high speed. I’m walking down the stairs. I’m showing my hands and I said I need to talk to you. He jumps out the trump and pulls out the gun that I took to get registered. He’s brandishing at me. But what he don’t know I got my 40 cow in my coat pocket. I got bulletproof vest on. I got two extra magazines. I said we need to talk. He was like ‘f*ck that, get off my property. We went back and forth. He said that ain’t loyalty and I said I was more loyal than he thought. I said ‘I loved you like a brother.’ When I went to my car, he said ‘that ain’t loyalty. When the Death Row is at me, you left me.’ I said I gave you option to pay me more money. He was screaming ‘that ain’t loyalty as I was leaving.’ He was hurt that I left and I was hurt that I was leaving him. Cause I still felt guilty about leaving. I still feel guilty to this day man…”

Big Naz really wanted to get paid, but the police were already involved in this situation. This is a story that modern technology might have stopped because Big Naz didn’t get the message in time that things were already escalated to a very high level. It’s a good thing he brought his loaded insurance policy as well. Hopefully, he got paid for his efforts.