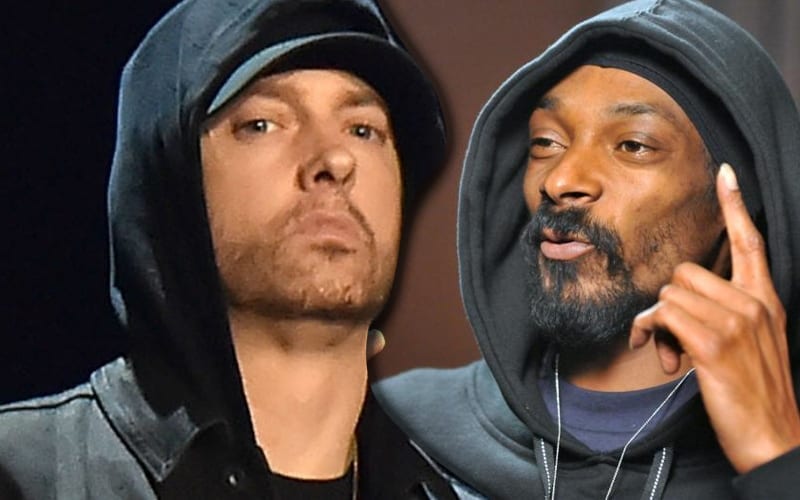 Eminem dropped a new video for Tone Deaf, and many thought it was in response to the failed cancel movement against him. The timing also gave him an opportunity to sling a little shade at Snoop.

Fans pointed out a very quick shot during the Tone Deaf video that immediately drew attention. A photo of a dog appears to be crossed out.

This beef between Eminem and Snoop Dogg was started in July 2020 when Snoop appeared on The Breakfast Club and he claimed that Eminem isn’t in his top 10.

“[Dr. Dre] has probably put Eminem in the position to where he could be one of the Top 10 rappers ever. I don’t think so, but the game feels like he’s Top 10 lyricists and all that that comes with it. But that’s just because he’s with Dr. Dre and Dr. Dre helped him find the best Eminem that he could find.”

Eminem then threw a line into Music To Be Murdered By Side B’s “Zeus” where he spit: “As far as squashing beef I’m used to people knocking me/But just not in my camp/And diplomatic as I’m tryin’ to be/Last thing I need is Snoop doggin’ me/Man, Dogg, you was like a damn god to me/Meh, not really (haha)/I had dog backwards.”

This new Easter egg from that Tone Deaf animation certainly gives off the impression that Eminem and Snoop Dogg aren’t on the best terms. That music video was full of clues, even a possible MTBMB Side C.