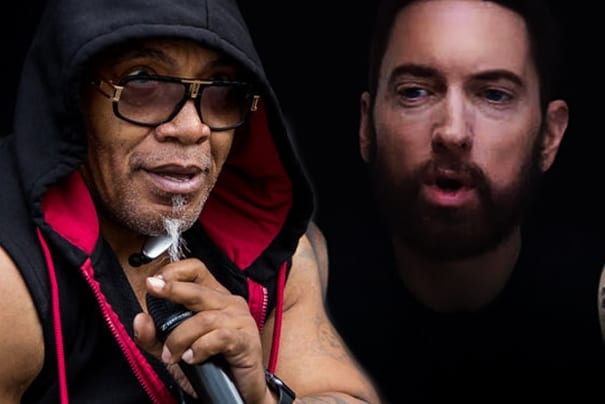 Melle Mel, one of the most celebrated legends from the old school of rap has once again expressed strong criticism to the world about the current state of rap. The leader of the now-disbanded Grandmaster Flash and The Furious Five had something to say about how glorified rappers have become.

In a series of interviews with DJ Vlad, of which the fourteenth one just came out, Melle stated that it would be “one of the easiest things” to defeat Eminem in a rap battle, after he was asked the question by DJ Vlad.

Easily. t would be the easiest thing I ever did. At the end of the day, mechanically, technically, he’s a great rapper. But I’m the greatest. I know how to write it. I put it down, it’s going to stay down. It would be the easiest thing I ever did. When people bring it up, just say you can’t beat Eminem. Just say that. But I’ve been doing this all my life. It would be easy, and I don’t even write like I used to.

It seems that he feels his skills came to him naturally, while those who are not naturals at the rap game had to cultivate them and share a common disadvantage with each other when faced with a natural born talent.

He also spoke about how the current scene of rap does not have exceptionally talent rappers or emcees. While talking about the audiences, he said that people buy anyone as being a great rapper.

This is my destiny. Everyone out there rapping, ya’ll trying to do something I already did forty years ago. Easiest thing I ever did. Everyone would say oh that’s impossible! No, you can’t! If you think there’s fifty great emcees, you aren’t one of them,” he states. “There’s not even fifty great n***as, how its going to be fifty great emcees? Great, that changed territory. It’s not there. It’s just fifty guys that can rap, and made records. That’s not of all time, that’s when records came out. My mechanics and my dynamics, my knowledge of what rap is all about, it supersedes anything that goes on out there. People like, how this old muthafucka going to beat so-and-so? Easy — cause I’m an old muthafucka, I’ve been doing it longer. I can do it better than you.

Mel argued that in order to be great, you had to change and revolutionize the scene. Taking Rakim as an example, he stated that when Rakim first come out on the scene, rappers had to re-assess their positions. However, Eminem didn’t change anything, according to him.

I never had to rap different for nobody else. When I heard Eminem I could rap the same. The game didn’t change. It didn’t stop nothing. They toss around greatness too much. In order to be great, you had to change something. You could call Eminem a great rapper — if he was so great, then why isn’t there fifty white rappers?

While Eminem is likely to remain silent and respect his predecessor’s vision and criticisms, it might just be that his Stans and other rappers might try to spark a debate on social media based on what Mel’s perspective. Do you think Melle can beat Eminem in a rap battle, let us know in the comments.