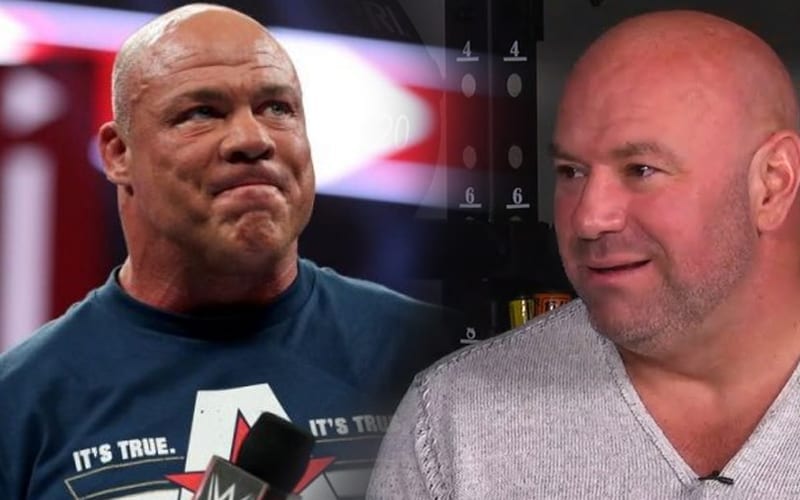 WWE Hall Of Famer remains one of the best pro wrestlers to have ever stepped foot inside the squared circle. It seems Angle might have gotten into the MMA world as well at point in time.

While speaking on ‘The Kurt Angle Show,‘ Kurt Angle discussed how he first got interested in UFC back in 2001 when UFC became really popular, thanks to the likes of Tito Ortiz, Chuck Liddell and more.

“Yes. I was interested; I would say around 2001, UFC would start becoming really popular. This was after Dana White purchased the company. By then, I was well into my pro wrestling career.”

“So I was kind of putting feelers out, watching the product. You know, watching Randy (Couture) and Chuck (Liddell) and Tito (Ortiz). They all had great programs together. The fights were awesome.”

Angle then revealed that he almost signed with UFC back in 2006. Angle was contacted by Dana White that year and was offered a contract. Angle had just started working with TNA at that time, but he also wanted to compete in MMA.

However, UFC didn’t allow him to work his TNA dates and ultimately, Angle decided to stick to TNA.

“I actually approached UFC again in 2006. Dana White offered me a contract, but I asked him if I could do TNA and UFC, and he said, you can’t do it. You have to do one or the other, not both. I had just signed with TNA, and I felt an obligation to continue on with them, and I’m glad I did. There is no way in hell I was going to do UFC. I was lying to myself. My body just wasn’t healthy enough to do it. It wasn’t healthy enough since the Olympics when I broke my neck the first time. So, I made the right move. I made the better move by going into pro wrestling.”

Kurt Angle would go on to have a tremendous career in TNA until his departure back in 2016. He would then return to WWE and end his in-ring career at WrestleMania 35 in 2019. We certainly wonder how Kurt Angle would have fared in UFC.