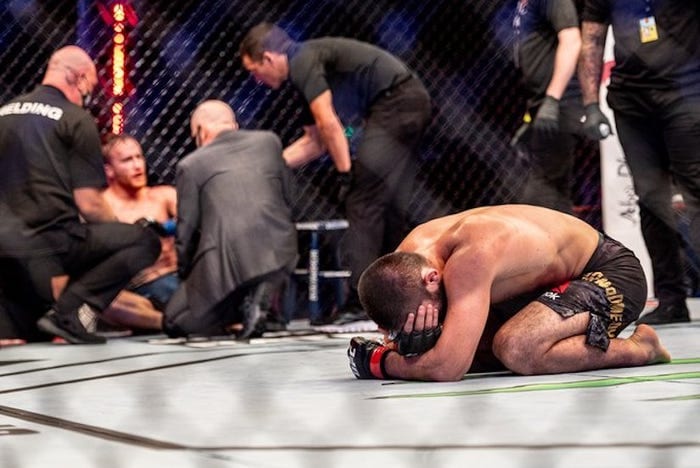 Khabib Nurmagomedov is one of best mix martial artists to have ever lived. He has had one of the most dominating careers in the history of UFC, with a mind-boggling record of 29-0. Khabib always comes off strong and fierce, so it is natural to feel shocked after seeing photos of him suffering from an infection.

The UFC lightweight champion Khabib had a fight with Justin Gaethje in the main event of UFC 254, which took place in the Yas Islands of Abu Dhabi, UAE. Khabib put on one of the most breathtaking and impressive performances of his career, taking down Gaethje via a triangle choke hold at the end of round 2.

While the Russian-born champion decided to retire with a record of 29-0, UFC President Dana White is positive that ‘The Eagle’ will spread his wings for another hunt again.

Khabib revealed many things about his condition before the fight, such as being diagnosed with mumps, being hospitalized due to which he had to miss two whole weeks of training camp.

While being in an interview with another fighter Magomed Ismalov, Khabib shared the pictures of his swollen face due to the infection. He also shared the picture of his injured left leg. He also told Ismalov that he had had to go into the Gaethje fight with a bandaged thumb, because he’d broke it earlier.

It’s perhaps only Khabib who can suffer through so much and still take out “The Highlight” in less than two rounds.