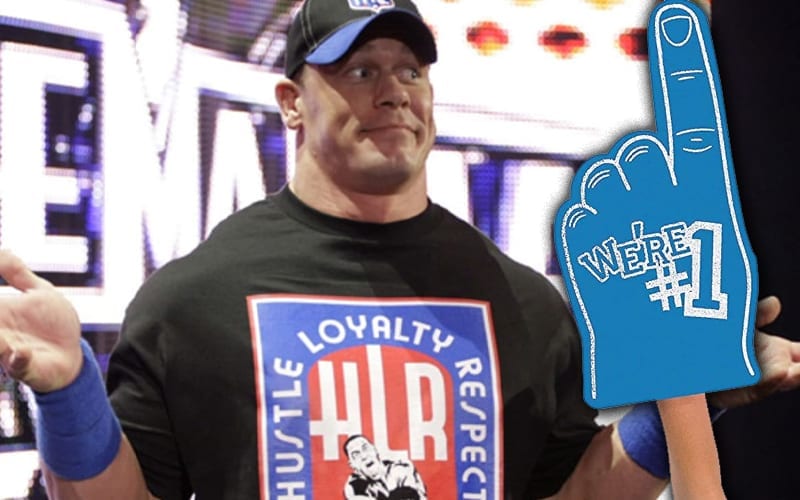 John Cena is making tons of waves and he has several movies slated to be released this year. That’s not even counting the books he has in the pipeline. All of that might not have happened because of one creative choice in WWE.

Former WWE producer Arn Anderson revealed a very interesting story about John Cena going off-script. One time it really cost him. Anderson told this story on his ARN Podcast in gripping detail. In the end, Cena is lucky that Kurt Angle only beat him “half to death.”

“[Cena] was wrestling Kurt Angle, as we know Kurt Angle is the real deal, he’s an assassin. All of a sudden, I see John, out of nowhere during a random time in the match, he rolls out of the ring, goes over the rail about 15 rows deep, grabs one of those big foam hands and folds it into a bird and points it at Kurt Angle. The audience popped, but as he gave it back and came over that rail to rejoin the match, guess who was waiting on him and not too happy about what just happened? That would be Kurt Angle and he proceeded to beat John half to death.”

“He got a little stiff and snug with him because it was something that did not work in the match, it was unprofessional, it was just a foolish thing to do during that point in the match. It’s just one of those things that goes through the learning process, if you learn from those mistakes you can accelerate and move forward.”

That creative decision by John Cena almost cost him in a big way. Thankfully, Kurt Angle stopped actually beating the bejesus out of Cena and they continued wrestling their match. That was definitely a lesson for Cena to learn in the process.