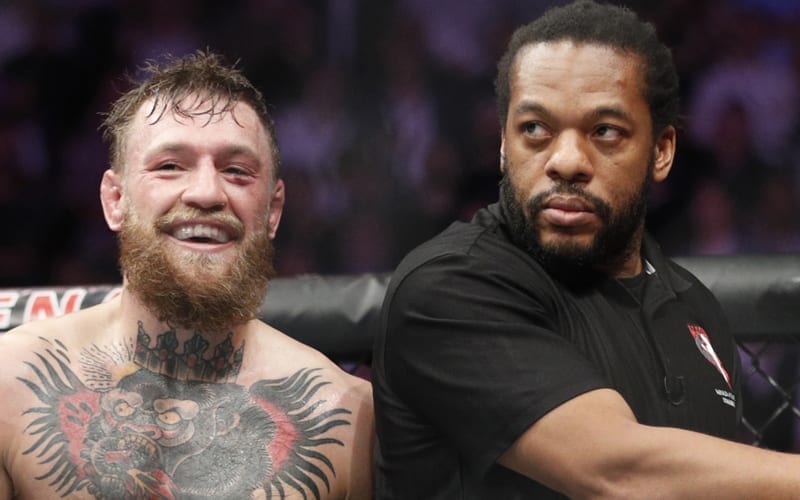 Conor McGregor makes a ton of money from the UFC, and the company also racks in the big bucks whenever Notorious fights. Herb Dean officiated McGregor’s battle with Khabib Nurmagomedov, and there are some questions about that.

UFC 229 saw Khabib defeat McGregor, but there was still plenty of controversy. Official Herb Dean let a few illegal moves go, including grabbing Khabib’s hands and holding onto the cage. Dean was heard reprimanding to “don’t grab the shorts.”

Khabib Nurmagomedov’s coach recently had a chance to ask Herb Dean about Conor McGregor’s cheating antics, but he doesn’t seem too bent out of shape over it.

“How much did you get paid Herb? How much?” Khabib’s coach asked Dean in a newly released video. This was dropped online on Feb 28th.

“I was trying to do a good job,” Herb Dean responded. You could tell he was picking his words carefully.

Khabib’s coach then asked: “Were you well-compensated, though?

“That’s the thing; I’ve never been well-compensated,” Dean said with a smile on his face. This was not confrontational at all, and it seemed like they were having a good time with the topic. After all, Khabib still won the fight

“Coach, I forgive him,” Khabib said to end the conversation. It seems like this subject is water under the bridge for Khabib. Some fans might still not be okay with Conor McGregor’s underhanded tactics, especially in that fight.