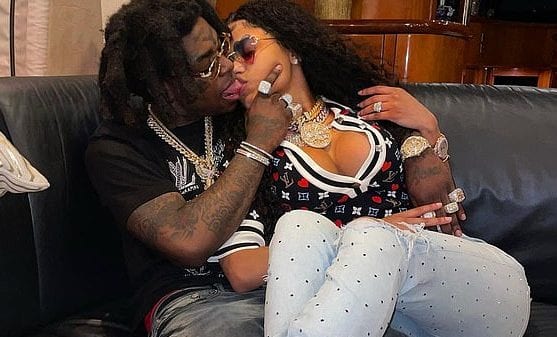 Just weeks after being pardoned, rapper Kodak Black has tattooed the name of fiancée Mallow Rackz. Mellow posted a photo with Black on Instagram where they both have tattoos of each other’s name.

Before ex-president Donald Trump left his office, he offered 73 pardons and 70 commutations. The list majorly featured convicts with non-violent charges on their name. Kodak Black was given a sentence of 46 weeks for providing false information on a federal document in order to procure firearms.

In the Instagram post, Rackz had Kodak’s real name Bill tattooed on her right cheek. In the photo, she was kissing Black on his cheek and he had a tattoo of her real name, Melody, tattooed on her neck.

Kodak Black was involved in quite literally a love triangle with Rackz and rapper Rynaee Trill. After Kodak proposed to her, she officially left Rynaee and got engaged with Kodak.

Congrats to Kodak and his new fiancé Mellow Rackz on their engagement 💍💘 pic.twitter.com/3TLD5ooFXZ

With a series of bold moves, it seems that the love between Kodak Black and Mellow Rackz is real.